This week, we’re going to talk about finding the vegan at your average delivery type place.  I’ll eat anything, as is well documented, but next month, I tie the knot with a woman who’s allergic to eggs and harbors a deep dislike for eating chocolate, dairy, and land animals (she can be convinced to eat the swimming kind).  As such, it has become a regular hurdle in my life to find things she’ll eat, whether it be at the grocer’s, my own restaurant, or the places I research.  She had an open house after her school day ended, so we needed something easy for dinner.  Delivery was the natural choice, but your average pizza place doesn’t have anything worth eating for the vegans out there, right?

Pizza without cheese (dairy-free Morgan agrees) is really missing something—tomato pie is an entirely different conversation.  Because we can’t expect every single town to offer a totally vegan (complete) pizza, the key is something that I think my generation (and below) forgets.  These little pizza places are really good at things other than pizza, like sandwiches and appetizers.  I placed a Barcelona Pizza order at around 2 PM for an 8:15 delivery, and the worst part about that was thinking about our sandwiches for six and a half hours. As it turned out, Barcelona passed this little test far easier than I was expecting (which just means I’ll have to run this experiment again); there’s a vegetarian cold sub right there on the menu.  It consists of broccoli, mushrooms, black olives, spinach, green peppers, and ranch on some very lovely Italian bread sliced submarine style.  Morgan went without the ranch and added oil and vinegar, plus lettuce, tomato, raw onion, pickle, banana peppers, mustard,  salt, pepper, and oregano.  She added Hellmann’s Vegan Mayo (which is both real and delicious) herself and had lots of good things to say about her sub, but more on that later.

First, I’d like to say a few words about “hot peppers” as they appear on this menu, sure, but also so many others.  Ordering online, I had no way of knowing whether they were going to be the aforementioned banana peppers (which they were) or ghost peppers.  T

hey could conceivably have been anything with any kind of tang or bite to the flavor, not necessarily heat specifically.  I figured from a European-style restaurant (particularly in the context of sandwich building), they’d be most likely to be banana peppers (or possibly pepperoncinis).  It turned out they were banana peppers, but as a precaution, I didn’t check the little box.  Instead, since the site gave me the option to type modifiers in, I concisely but politely said something to the effect of “if hot peppers means banana peppers, please add.”  I had noticed elsewhere in the menu that they had avocados, so in that same box I said “add avocado if possible; upcharge is fine.”  As it turned out, it was possible, though they did charge me.

My lovely fiancee is very picky about her bread.  She’s not a huge fan of bread in general, but she understands its mechanical necessity in most meals.  Thus, justified bread is acceptable in the Bucket Book, so long as she is properly distracted from it.

This meal was the first time I ever heard her compliment the bread of a sandwich so thoroughly.  I didn’t get a bite—it was gone too quickly and I was too enamored with my own sandwich—but they must have hit those oil and vinegar levels perfectly for her to not have wanted more bread but not have complained about sogginess or flavor problems.

I’ll end with the beginning of the meal: our fried mushroom appetizer. 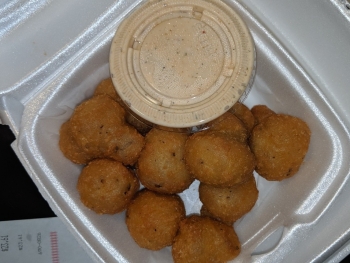 I used the message function and the information I’d gleaned from my research again here to ask if instead of classic ranch we could please have their chipotle ranch.  They obliged, but I didn’t notice whether they charged me for it.  I wouldn’t have minded if they had, because a bit of spicy goes a long way when paired with a good amount of fried savory.

We enjoyed all of our food from Barcelona Pizza, but there’s a lesson here I don’t want you to miss.  Just because it was easy this time doesn’t mean it’ll always be, but on the flipside of that coin, just because it’s not obvious doesn’t mean it doesn’t exist.  I’ll be redoing this experiment at a more demanding location in order to generate a more interesting story, but my moral here is an old one: don’t judge a book by its cover.  I understand being a picky eater or having dietary restrictions—there’s no shame in that.  If your diet is restricted for any reason, though, don’t write off a place until you’ve given it a chance to provide for you.  You might just be surprised at what you wind up with.