Part of building a life together is agreeing upon what sorts of things you’ll want to be surrounded by in the home you share.  This is something I also talk about with platonic friends, so I knew Morgan and I agreed on that nice rustic modern decor long before we ever thought about moving things along, so to speak.  We’d found places like The Magic Hat Artifactory to be really cool and fun places to hang out, but we’d prefer other bars, if you take my meaning.  Walking into Autumn Arch Beer Project was a splendid experience for us, what with all the clean, straight wooden lines paired with industrial stylings. That being said, it goes far deeper. 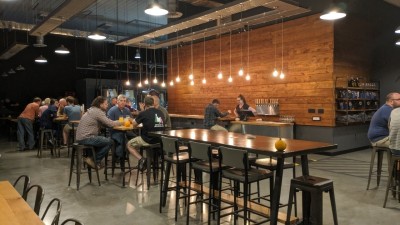 Autumn Arch is what I like to call a nanobrewery, as they don’t distribute their beers.  The distinction from the term microbrewery is highly semantic, so as long as you’re on my site, we’ll play by these rules—microbreweries distribute locally, nanos don’t distribute.  Autumn Arch (which ironically shares its initials with Alcoholics Anonymous) literally moves their beer dozens of feet—at the most—from the fermenting tanks to your glass.  This goes nicely with their self-proclaimed experimental style: it’s the small business version of sitting in a friend’s kitchen while they try recipes out on you.  The question becomes, then, whether or not it works, whether these experimental brews are worth drinking or not.

Come with me on a journey; we were certainly taken for one as the bartenders indulged our rampant sampling.  In fact, they encouraged it—a female bartender got us situated when we first sat down and happily gave us samples of some things we were cursorily interested in.  They were all delicious, but our decisions were relatively easy.  Morgan went for “Mere Tenacity,” which was advertised as a Hazy IPA, and I went for the “Sans Pumpkin Porter”—as the name suggests, no pumpkins were harmed in the making of this beer.  Instead, they use a spice blend you might use in a pumpkin pie or latte, successfully suggesting the pumpkin flavor without using any of the gourds themselves. 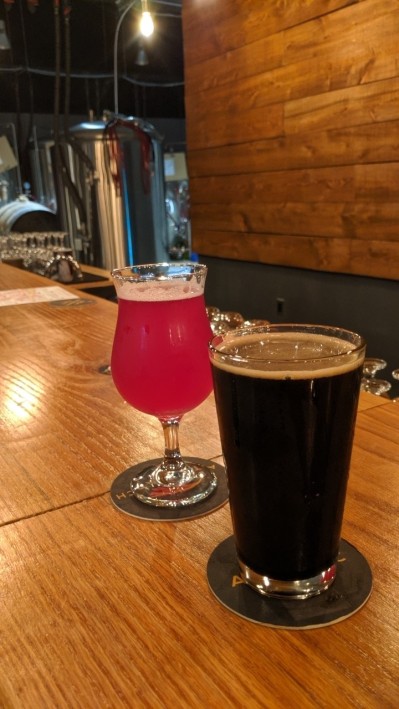 Both of these beers were a hit for us.  Morgan’s Tenacity was an excellent brew, but she hesitates to agree with the Hazy IPA classification.  It’s brewed with strawberry and red dragonfruit, which gives it the vibrant bright red color.  She described it as “crisp and juicy, like biting into an apple.”  My sips confirmed this, and I agree with her qualms about calling this a Hazy: it was certainly juicy, but there was very little hop flavor (bitter, floral, or otherwise) that came through in the finished product.  This clerical concern won’t affect your enjoyment of the beer in the least; I’m simply hoping to prepare you for the brews ahead.  My Sans Pumpkin Porter was a rich, dark, spiceful number with malty overtones and the pumpkin pie delightfulness we’ve come to expect from this time of year.  It’s got a delightful warmth to it, which is an aspect of beer that I can never get enough of.  This became apparent when I discovered my glass was not as big as I initially thought, and I began to run clean out of beer.

Luckily, though, another bartender wandered over to rescue me.  I had my notebook out on the bar, scribbling furiously about the beers we were drinking and the decor and atmosphere, and when I asked him about the pumpkin porter, it began a conversation that ended in him giving us samples of the rest of the beers on tap.  I can say with absolute certainty that they’re all good.  Different styles, of course, so pick to your tastes, but from what I can tell, there’s no way to go wrong at Autumn Arch.