Even though it was a good choice on almost every front, I really felt terrible taking Morgan out of Vermont. To simply say “it’s her home” doesn’t capture the delightful kookiness or deep respect for the world which are both systemic within the culture of her hometown.  Here in the MidAtlantic, far too many people keep their heads down and live day by day, heedless of their effect on the world around them.  It can be hard to watch her adjust, like greyscale photos of stained glass windows: wasted beauty.  This week’s restaurant is a beacon for her, reminiscent of the things she was surrounded by in Burlington.  Daily Veg is an all-vegan restaurant, but don’t let that fool you.  Morgan’s ecstatic to finally have access to a decent milkshake (and I’m downright impressed). 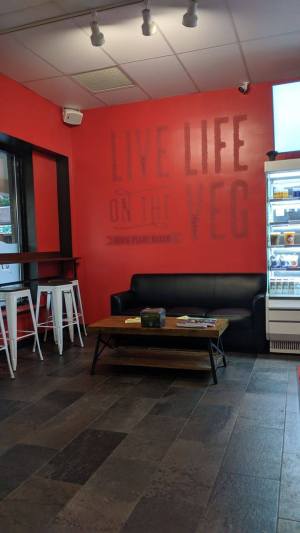 I know it’s hard to believe that a dairy-free milkshake could capture the delightful thickness, the richness, the weight of the genuine article, but Daily Veg delivered a shake that I would have felt guilty to have drunk the bigger size alone (not that I think you should; I just have my own goals).  This textural triumph would be a theme for our time at Daily Veg.  Morgan’s Santa Fe Chick’n Wrap was smoky, it was perfectly spiceful, it had a delightful creamy aspect (avocados and vegan ranch), and while the chick’n didn’t do exactly what chicken should, it did chicken’s job, and the rest of the sandwich framed it well to mask its imperfections to create a delicious, vegan meal.  This was a point Morgan brought up halfway through: one of the hardest things about going vegan is your inability to recreate dishes you used to love—like that milkshake.

The mushroom soup, unfortunately, didn’t pass her test.  She called it generic in a way that implied an incompleteness.  Daily Veg hasn’t been in its current location for six whole months yet, and I’d like to think I’d have heard about it had it opened first in another location—everyone I know knows this is what I do for a living and tells me when they enjoy a restaurant.  All that to say that a sort of basic soup could be indicative of nothing more than inexperience, and it didn’t even fail.  It got a C- at the worst, but probably did better, as it was the soup the menu said it was going to be.  She thoroughly enjoyed her wrap, though, and I enjoyed my nachos, even despite their lack of dairy.

I hear common complaints with vegan foods from non-vegan palates: they taste disgusting; a burger without meat can’t be a hamburger, not really.  I’m gonna get a little metaphysical here; just stay with me, and I’ll bring you back around, I promise.

To understand my distaste with these complaints, let’s talk about what cheese is.  On a burger, it’s a textural additive, introducing a creamy element (which can be enhanced with mayonnaise) and further justifying a fat, acidic slice of tomato to add the third point of our beef and cheese harmony.  It’s the warm, gooey bit on our pizza that holds it together, even after it’s sliced. Cheese is substantial in a totally different way than carbs, and is therefore satisfying in its own way.  That’s why nachos are such an amazing meal too: they’re a carb dump and a cheese dump, plus they often come with meat, and now we’re back to the belly harmony often referred to as “A Cheeseburger.”  The right size burger feels good down there every time. 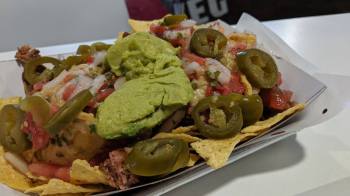 So, when I bite into these nachos and taste something that my Brain says shouldn’t be there, I ask it why.  It hesitates for a moment and then angrily says, “I ain’t never had nachos what taste like these!”  I nod, because Stomach and Tongue agree, but Stomach says “I don’t know, this feels like nachos.  Is it bad, Tongue?”  Tongue needs another bite to decide, but winds up saying, “Bad?  No… It’s not my favorite, but it blends in fine.”  So it is that, as I continue through the dish despite the initial weirdness, I find I enjoy a plate of Vegan nachos slathered in dairy-free cheese and made with beefless Boca crumbles instead of ground beef: they’re satisfying in the same way.  At the end of this meal, Stomach was working on a full plate of nachos, Tongue had had an adventure it loved, and Brain had some preconceptions to chew on yet wasn’t confused about my appetite.  I wasn’t hungry anymore, and that was what I’d gone to Daily Veg to change.

I’m talking about Impossible Patties too in this ridiculous metaphor (Daily Veg serves them).  If you focus on what your body’s looking for, vegan substitutes more than pass the test, and the minds in the kitchen at this restaurant know what they’re doing with the unexpected flavors in such things as Boca beef and dairy-free cheese.  Don’t get me wrong, I still prefer dairy cheese, but I find the terms “disgusting” and “inferior” to be overly harsh and unfair.  We’re not this militant about low-salt diets, and salt kills certain people just as sure as dairy does.  Hell, I’ve met more people than I ever expected to who were allergic to pork, but no other meats.  The omission of an ingredient considered traditional has never stopped us before (see tomato pie, non-alcoholic beer, and turkey bacon), so why should it stop us now?