I struck gold when I moved to Burlington for school.  Not literal gold, of course, but the metaphorical gold of lifetime friendships and irreplaceable memories.  This place, however, was great long before my friends and I showed up, and that’s the gold I’m here to discuss.  I’ve spoken before of the area’s Localvore culture, and with my burger this week, I had a can of hard cider brewed with that exact philosophy.  The Citizen Cider Lake Hopper is made with ingredients from both sides of Lake Champlain, but that’s it.  In some cases, the hops and the apples were grown on the same farms. The best part about it, though, is that it’s delicious. 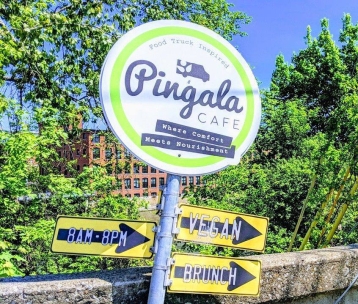 graduated into a fast-casual restaurant with the same fare.  I was lured here by my vegan girlfriend with the promise of a burger that was made to feel like eating a beef burger, but without any of the animal.  I figured it was worth looking into, as either I’d never have to eat another vegan burger or it really would be that good and I wouldn’t regret trying it. Either way, it’d definitely be worth writing about.

Pingala Cafe’s Fakin’ Tease Burger is served on a whole wheat bun, with coconut cheddar, chipotle aioli, greens, tomato, eggplant bacon, and a range free patty.  The first thing I did when it came out was to take a piece of the eggplant bacon off and try it on its own.  I had to know whether it’d sink or swim immediately, and it was like biting into beef jerky.  Tougher than pork (normal) bacon, but peppery and smoky and surprisingly meaty.  I dislike eggplant, but I removed none of the bacon

strips from this burger.  Tentatively, I took a big bite out of the whole thing, and was hit full in the face by all of the flavor between those buns.  The (eggplant) bacon is delicious on its own, as is the free range patty, not to mention the chipotle aioli.  The cheese was creamy and flavored properly despite being totally dairy-free.  It did behave more like a cheese sauce than a slice of cheese, but I made sure to eat over my chips, so I was left with cheesy chips once I’d devoured my burger.

The patty itself passed my inspection, better than I expected (and I believed my girlfriend all along).  It was incredibly filling, and my body responded to the protein dump like it normally would after a big, messy burger.  I believe a good burger should be

picked up once and then licked off your hands once you’ve finished it—at least, that’s how I eat it.  Pingala’s Fakin’ Tease made a beautiful mess of my hands and my chips, and snacking on them during and after the burger was a treat.  Paying attention, I could tell it wasn’t ground beef I was chewing, but were I to focus on any other aspect of the burger, I’d stop noticing and simply enjoy it.  The range free patty (by Hungry Planet) successfully did beef’s job in this burger.  That being said, I still prefer red meat in my patty.

I will say that if you’re a person without any dietary restrictions who happens to be craving a burger, this may not be for you.  I can’t promise it’ll fill the void only a perfectly cooked hamburger can.  However, there are two key groups to whom I would recommend this every time.  The first is a bit obvious: those with meat-free diets who miss the joy of a nice, juicy cheeseburger.  My girlfriend said halfway through her first one, she’d had to stop and just make sure for herself it wasn’t beef; I got that out of the way immediately.  That, though, is how convincing the texture is.  The second group is one to which I belong quite soundly: the burger lovers.  This is a burger, there’s no doubt in my mind.  My next one will be a red meat patty, but I know I’ll eat another Fakin’ Tease.  If you’re a lover of the cheeseburger and are interested in trying something (a bit different) that you’ll love, give Pingala a chance.