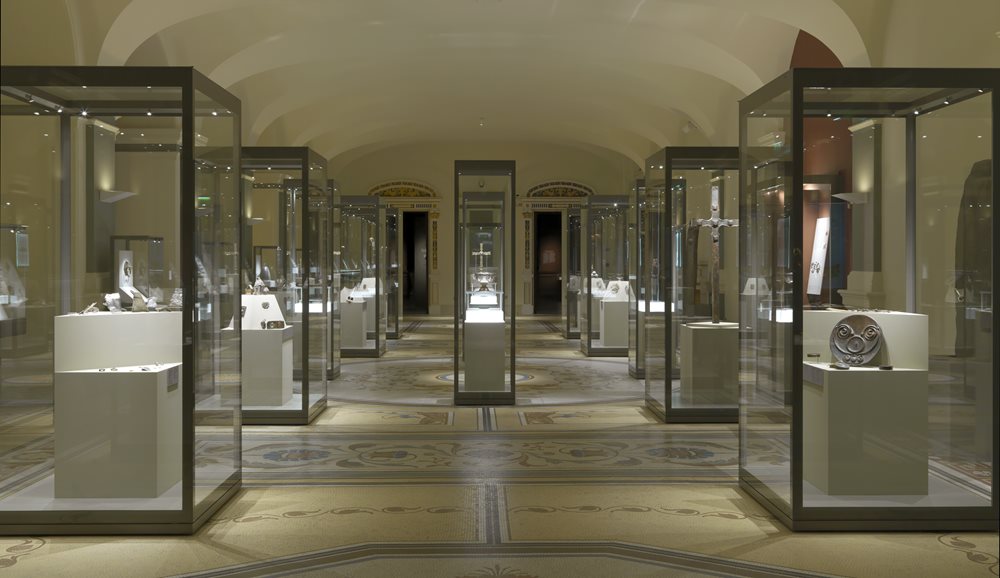 Growing up in the United States, it is easy to lose perspective on what the word “old” actually means.  There are ruins about, sure, but I visited an Irish monastic ruin site just a couple hours south of Dublin that predates irrigation in the American Southwest.  I’m not dissing the Native Americans (they showed up in their land much later than the Irish), I’m simply illustrating how young everything on this side of The Pond is.  Modern humanity reached Europe about twenty thousand years before they reached the Americas, and it shows.

Our first stop (after spending a day settling in) was the National Museum of Ireland, situated on Kildare Street.  It’s broken up into four major branches: The National Gallery, The National Library, The Museum of Natural History, and The Archaeology Museum.  I wanted to start with the deep history of this brand new (to me) place, so there we went.  Ultimately, it would become apparent that the Archaeology Museum has the best gift shop of any of the national museums we’d visit, situated in a high-ceilinged rotunda entryway before any of the exhibits.

I suppose having been out of school for a while could have something to do with it, but I really enjoyed learning about Ireland’s ancient history.  It was magical to go to a place I knew very little about and begin absorbing information about it once there.  Sure, I’d done research on things I wanted to do during our visit, but there’s always more to learn.  I didn’t know, for instance, that much of what we’ve learned about the ancient Irish comes from hoards they’ve found buried in random places.  Even cooler than ancient gold, however, are the bog bodies.  On display in the Archaeology Museum in Dublin are the naturally mummified corpses of three ancient humans—in varying states of preservation.   There are placards containing what their discoveries tell us situated separately from the actual mummies, so if you want the information without a closeup on a bog man, you’re in luck.  There is also a wealth of information available on the history of Vikings on The Emerald Isle, both at the Archaeology Museum and at another (not free) museum called Dublinia, attached to Christchurch (and just up the street from St. Patrick’s Cathedral). 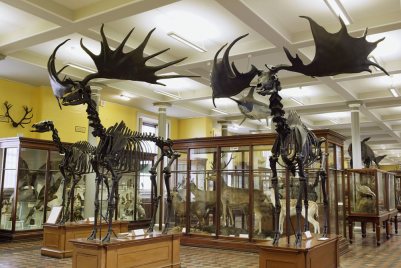 Getting back to the free stuff, the Museum of Natural History (or “Dead Zoo,” as the locals call it) is actually attached to the Archaeology Museum, but don’t let that fool you.  To walk from its entrance to the Dead Zoo, you need to walk around the block (left when you get back to Kildare Street, left at St. Stephen’s Green (but don’t cross the street), and then left on Merrion Street Upper; it’ll be on the left).  It fully deserves its nickname, as the bulk of the exhibits are mounted skeletons and taxidermy animals.  The Dead Zoo is also frequently referred to as a “museum of a museum,” as it hasn’t really changed in over a hundred years.  That being said, the displays don’t feel in the least irrelevant.

There are ten thousand species on display right now, divided into four floors. The ground floor is organized more like a museum from a hundred years ago; it’s full of Irish fauna, both extant and extinct (later museums would be organized biologically, rather than geographically).  It’s the perfect introduction to the national museum: “Here’s all the cool Irish stuff.”  Go up one floor and it’s the beginning of the rest of the world.  Two whale skeletons hang from the ceiling, there are elephants and a polar bear, and tons of extinct species, some of which I’d never even heard of.  Tragically, the next two floors have been closed to the public since 2007, when a limestone staircase collapsed with people on and around it.  Renovations are currently underway,  but I have been unable to find any guesses as to when these floors will reopen.  It’s truly upsetting, as there are a ton of rare specimens up there, including a solitaire bird and, right next to it, a dodo skeleton.  They even have a sabre-toothed cat skeleton in storage.  You can bet that as soon as those exhibits reopen, I’ll be on the next plane to Dublin to see these majestic (if stuffed) animals.

I ran into a recurring problem in the museums of Dublin: I wanted to spend more time at each exhibit than the rest of my group.  Nowhere was this more true than the National Gallery, which houses roughly fourteen thousand works of visual art. I’d have loved to contemplate every brush stroke and chisel mark, to ponder the contrasts and the colors used.  I’d have stared at their Rembrandt for hours, hoping to find some flaw (it can’t be that perfect).  Alas, I was with a group and so needed to be sensitive to everyone’s attention span, not just my own.  The Gallery has a wonderful café and gift shop (I wanted several books on sale there), and Rembrandt isn’t the only famous name this museum could boast.  Jack Butler Yeats (William B. Yeats’ brother) is among these names, alongside Vermeer and Titian.  It’s a sprawling interior, with many canvases larger than I’d ever seen before.

The National Museum of Ireland is easily a several-day endeavor if you intend to spend any amount of time at each of the branches.  They’re unbelievably close to St. Stephen’s Green, a museum unto itself, and cover an impressive range of study.  I can’t recommend to you what order in which to visit them, as I don’t know how you think.  I believe there is no wrong answer, so do what feels right for you.

Up next, I’ll give you the lowdown on the fun I had in Dublin that did cost money.

You've stumbled upon a collection of stories and the like about the things to do (or that I've done) in the places I've been in recent months. Feel free to browse, and please enjoy.
~malachi champion