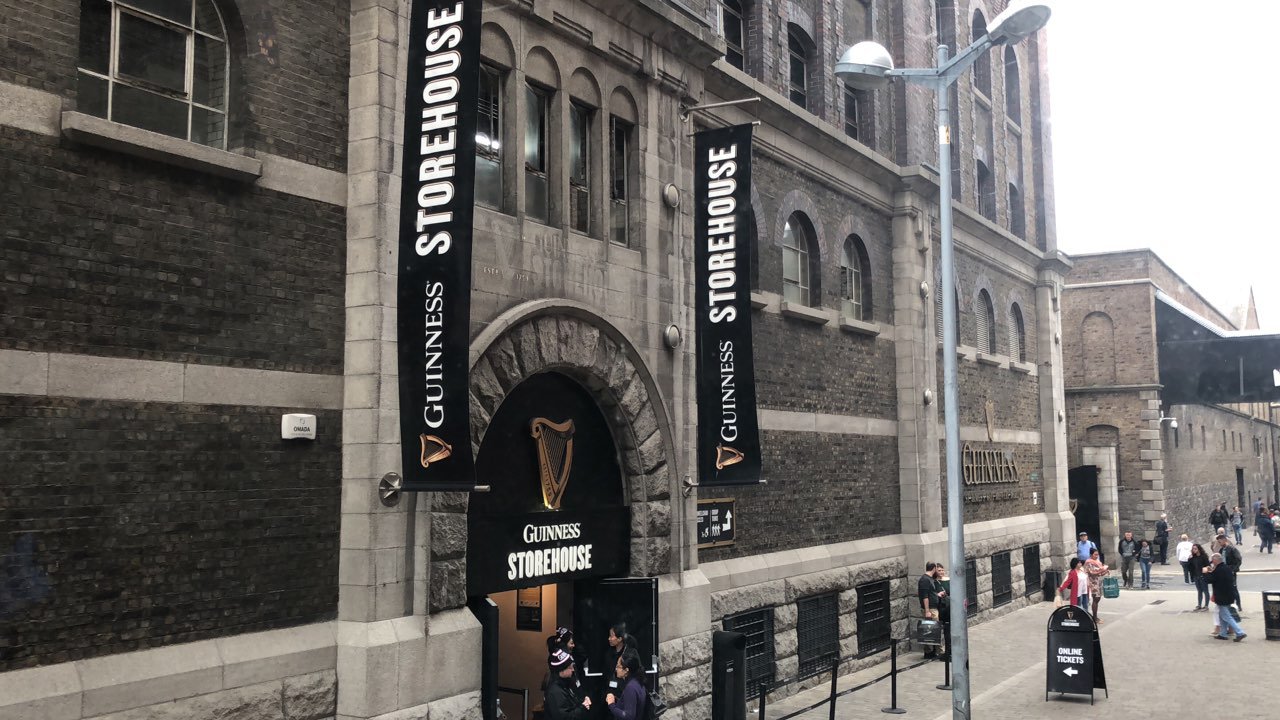 I’m sure that you’ve heard that Guinness tastes better on its home island (The Emerald Isle, of course) than it does here in the States. I was curious as to the truth of these claims, so the night before our flight, I went to my local pub and had myself a pint of The Black Stuff.  It wasn’t my first one ever, and it tasted just like I expected: rich and malty, with notes of hoppy bitterness.  Delicious, to be sure, but how much better could it possibly get?

The only way to know for sure is an actual side-by-side test, so I did the best that I could.  The first night we were in town, my sister (who is nineteen) was itching to hit up a pub and order herself a drink at the bar—a luxury she does not have access to at home.  Jetlagged to hell and back and still dehydrated from all the travel, I wasn’t looking for more than a nightcap, so I made that one count.  My research showed that a pint of Guinness in Ireland contains one particular flavor that I simply can’t find in American Guinness: smoke.  Though Guinness did just open a brewery in Maryland, their stouts continue to be brewed only at St. James’s Gate, in Dublin. Thus, the smoky, roasty flavor that cranks The Black Stuff up to eleven out of ten will remain solely in Ireland.

Taking the Guinness Storehouse Tour taught me where that flavor comes from, and many other things besides.  There is a single number I can remember exactly which I learned on the tour: 232°C.  It’s the temperature at which the brewmasters roast the malt to be added to the beer.  I’m no expert in the specifics of malt roasting, but this seems high to me.  Apparently, it’s this particular step that gives Guinness Draught Stout its distinctive color and flavor.  One starts the tour on a series of displays representing the main ingredients of the legendary beer, then you’re taken through all the steps in the process of bringing The Black Stuff to the customer.  This includes aging, quality control, advertising, and pouring (and there is a wrong way to pour Guinness).  The quality control and pouring bits are interactive, but I only had time for the taste test.  How could anyone resist the chance to taste a perfectly fresh batch of the legendary beer, brewed the same way for almost sixty years—a recipe almost 260 years in the making.

After waiting in a line that looks like it’ll take way longer than it actually will, they take you into a totally white room with four little fog machines. Each one emanates mist that contains one of the four major aromas that make up the delightful nose Guinness gives off.  Then, they fill up shot-sized samples of The Black Stuff from tap handles and escort you into the next room, filled with historical paintings and odds and ends.  The guide then gives a brief lesson on the proper way to drink Guinness—there are more steps than you think.  The most important bit is that the foam at the top tastes bad and isn’t what you’re going for.  The word “gulp” is specifically used whenever an Irish person explains it; you just have to dive right in.  But don’t swallow it right away, either!  To properly experience the flavor complexity, there’s an element of savoring the drink in your mouth before it goes down the hatch.  Then, make sure to follow your swallow with an exhale.  It sounds ridiculous, but the difference is very real.  Pouring a Guinness requires even more patience, as letting it sit (and cascade) is a necessary step.  Sadly, I cannot tell you about the particulars of the perfect pour, as time demanded I skip that portion of the tour.

The Storehouse itself is shaped like an imperial pint (the 20oz glass Guinness is always served in); as you advance in the tour, you climb the glass.  The floors get wider and wider as you climb, until you reach the very top: The Gravity Bar.  Representing the head on a freshly poured pint is a full circle of floor-to-ceiling windows looking out over Dublin.  It’s a profound experience to stand at the top of the world of Irish beer and look out over a fourteen hundred year old city, the placid countryside on three sides, the Irish Sea on the fourth.  Though probably less fresh than the stuff in the tasting room, the Guinness from those taps is still among the best you’ll ever taste.  However, if you’re not a rich, malty kind of person, another of Guinness’s brews is also available for free with admission: Hop House 13, a Eurpean Pale Lager.  It’s a well made, generally safe brew that’ll go with anything, including more of itself.

If you’re heading to the Storehouse, be sure to give yourself the time to do it right.  If you’re not the type to read every display, you’ll need less time than I did, but if you are like me, I can’t tell you how long you’ll need.  As I said, I ran out of time.  There is also an incredible gift shop, the only place certain merchandise can be bought.  There is a satisfying amount on the online shop, but certain apparel and glassware (among other things) remain Storehouse exclusives.  If you’re interested in history or advertising or international shipping logistics, there’s something for you even if you don’t care much for Guinness itself.

I originally thought that I’d be able to discuss the other paid museums we visited in this article, but I apparently had far too much to say about The Guinness Storehouse.  You’ll hear about the rest of those next week.