A saying I’ve heard in multiple (unrelated) places goes “Never meet your heroes.”  The wisdom behind this vague piece of advice is based on the idea that people are people, despite how we may view them.  Because memory is fragile, this idea was kicking around my head as I went back to Al’s for the first time in over a year and a half.

I have fond memories of the place going back to 2012, but Al’s French Frys opened

originally in the 1940s (in the very same location, as far as I can tell).  Originally just a stand with no indoor seating, they’ve come a long way.  Now, there’s plenty of seating, but Al’s hasn’t lost the Mid-1900s burger stand charm.  Red vinyl booths contrast wonderfully with black and white checkered wall tiles, and thematic music plays unobtrusively over the restaurant speakers.

Ordering is done in two parts.  First, you’ll tell an employee in a booth with a POS what menu items you want and which upcharge toppings to add.  The line moves on toward another station, where a line cook will ask what complimentary toppings you want.  Those of us with poor memories need not fret, as the lists of toppings are displayed conveniently in front of the worker asking what you’d like.  It’s an impressively streamlined process; even if there’s a considerable line, it doesn’t take long at all to get through.

And it’s worth the wait anyway.  Al’s comes from a time before giant fast food corporations, but their product is strangely similar to what one might get at a ubiquitous national chain: a compact, full flavor burger made in almost no time flat.  Closer inspection, however, will reveal a level of attention and care that marks the difference between true fast food and the fast-casual format that predates it.  I got a double cheeseburger and a hot dog with chili and cheese.  Topping my burger were chili, raw onions, jalapeños, ketchup, mustard, and mayonnaise; the dog had only chili, cheese, and raw onions. 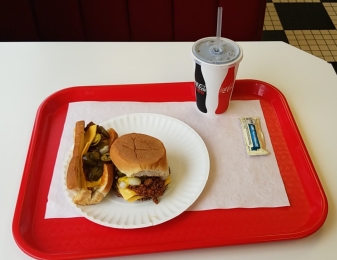 Normally, when I’m judging the flavor merits of a highly customizable dish, I’ll eat the most basic version to decide whether to call it well made.  Pizza is a perfect example; if a shop doesn’t have a good cheese pizza, no amount of meat or vegetables on top of it is going to overcome that detriment, though it can successfully be masked.  Hamburgers are the same way, but more so.  I’ve already had the basic burger at Al’s, and it passed the test, so there was no reason for me not to get toppings.  I’m glad I did, too; Al’s chili has a delightfully old-fashioned flavor to it and practically no spice of its own.  It’s a recipe I’d believe was perfected decades ago and hasn’t changed since (and thank goodness!).

Al’s is like a beautiful classic automobile, kept not just in working order, but shiny and impressive, with new upholstery on the original seats and a healthy rattle under the hood.  I’ve never been the only guest (or group of guests) in their dining room, and I’ve observed many a customer ordering their food to go.  So long as they don’t change a thing, I feel Al’s will be in business for decades to come.