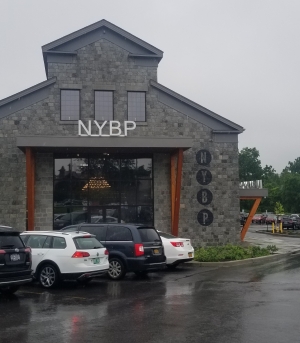 Even though they really mess up routine, holidays are so important.  Time flies; it’s good to have landmarks throughout the year.  A new, local beer/restaurant thing opened in the area where my parents grew up, and my Grammie immediately recognized it as a place I’d enjoy.  To be perfectly frank, she was right, and I think you’d like it too, dear reader.

While we were waiting for our flights to arrive, we snacked on the NYC Gourmet (fried) Mashed Potato Bites my Grammie had enjoyed during her last visit, and she’s right to recommend them.  As we crunched on the creamy, starchy goodness, my father and I debated whether the New York Beer Project is a gastropub that brews its own beer or a microbrewery with an excellent kitchen.  There is a systemic attention to detail evident everywhere from the decor to the menu (which lists recommended beer pairings for most of its items) that became even more visible the moment we bit into those Bites.  Ultimately—once our bellies were full and those flights were empty—we agreed that, like Iron Hill Brewery, it hardly matters, as it succeeds at both. 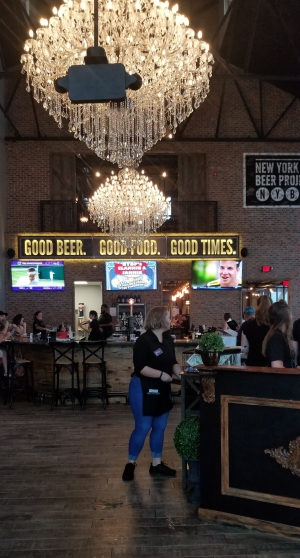 We started with a flight each: my father and I got eight unique beers between us; my mother got herself a margarita flight.  He ordered four beers from the top of the list; I ordered from the bottom. I truly think there’s a beer for everyone at NYBP, though the full bar has you covered if I’m wrong.  My favorite was one that has apparently been voted “the most refreshing beer in America”: their Supernatural Sour.  I’ve been on quite the sour kick lately, and going to Africa caused me to go totally bonkers for anything passion fruit, and Supernatural brings that blissfully sour flavor right to the front of the experience.  It’s a hunch of mine that NYBP might excel in fruit flavored beers, as among the eight we ordered, those were our favorites.  I also tried a hazy, New England style IPA, and I have a hunch Morgan would have been all about it.

My father and I both actually went with flights for lunch as well.  Not, unfortunately, beer for lunch, but food samplers in a menu section called “Non Stop Flights,” though there is no all-you-can-eat option.  He went for a Destination Flight: slider versions of their most popular burgers: Upper East Side (avocado, bacon, ranch), Times Square (swiss, sauteed mushrooms/onions, and “pub” sauce), and the Williamsburger (bacon, blue cheese, grilled pears, cranberry aioli).  That last one was his favorite: it took the most risks, so the rewards were the greatest.

My flight was a bit different, as few would call Buffalo, New York a destination.  That being said, my Flight to Buffalo was everything I’ve ever wanted on a tray together: 4 wings (your choice of sauce—I went with buffalo bleu), a Beef on Weck slider, and a nice little portion of buffalo mac n’ cheese to round it all out.  It’s no secret that this is a small collection of some of my favorite foods anywhere, and don’t forget that these are regional dishes served on their home turf.  As such, I won’t waste any time telling you how much I liked them.  Instead, I’ll talk about how well made everything was.

For starters, somebody at the table liked every beer.  Sure, the non-beer drinkers at the table weren’t fond of most of them, and my dad and I both had our favorites, but there was no flight glass with beer in it at the end of the meal.  My mom’s margaritas were three types with three different rims: salt, sugar, and the ever elusive spicy rim.  Spicy drinks are a recent thing in my life, and in order for them to be good, there is a requisite amount of real work required.  I know this firsthand; Morgan and I infused some tequila with jalapeños, and let me tell you.  A week is too long—it takes hardly any of that stuff to make a drink so spicy you’ll need another right away, just to give your mouth something else to focus on (we’re only doing a couple days next time).  For NYBP to have a spicy drink they’re able to make consistently spicy is a testament to the craftsmanship on display throughout their operation.

This craftsmanship doesn’t extend only to the drinks on this menu; a practiced tongue (and it doesn’t take much practice) can taste the difference between bottled and house made…most things, actually.  Mixing together a Hidden Valley ranch spice packet and the amounts of mayo and buttermilk in the instructions tastes better than buying a bottle of Hidden Valley ranch at the same grocery store as those ingredients came from.  Knowing my Buffalo Bleu sauce was mixed up in house wasn’t a victory of my refined palate, though; there were blue cheese crumbles stuck to my wings before I ever touched them.  Every bottle of “buffalo bleu” I’ve bought has lacked that necessary component: the actual cheese.

I’ll admit it: I ordered this because it challenged me in no way.  I knew that it hit all of my personal likes (regional food in that region, an area I’m sentimental about, variety, small batch beer, etc.), and this was the 4th of July weekend.  A big part of me wanted to be able to just enjoy the holiday, so I did.  I ordered something I just knew I’d like, and I enjoyed it.

I suppose what I’m saying is treat yourself.  We need holidays—we need to pump the brakes sometimes and enjoy the things around us, whatever they are. Part of why I enjoyed this experience so much is a bit roundabout to explain.  There are four major areas in the U.S. that I’m very attached to: Delaware and the MidAtlantic; Burlington, in Northeastern Vermont; Western New York; and Eastern Michigan, which I have never posted any writing about.  Of these, Western New York has the weakest craft beer scene (and I assure you that the correlation is pure dumb luck), so it’s really cool to me that The NYBP is in Victor (and Lockport), New York of all places.  Genesee is the only beer I’ve seen that’s both made in and available outside of Western New York, so a place in that area that makes beers that win national awards is a predetermined win for me.  My grandmother liked this place and thought of me, and she was right. Next, I’ll tell you how to enjoy Axum, in northern Ethiopia, and that did take a spot of work.  In the meantime, go enjoy something.  I know you have a favorite restaurant—don’t deny yourself a bit of enjoyment every now and then.  Just make sure you go back to work on Monday.