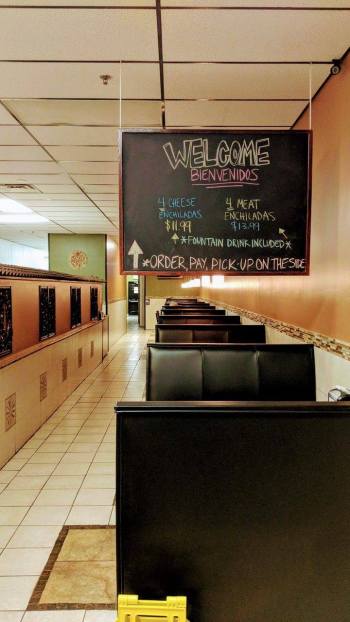 In my travels, I’ve passed hundreds of little strip mall restaurants named in other languages, choosing instead to eat at a place with a more unique image, someplace that specifically embodies the culture of whatever area I happen to be in or suits the particular cuisine I’m after at the time.  When my mother first brought me to El Maguey, I had never heard of it before despite driving by it almost every day.  I’ve now been there thrice, and the only other people I’ve seen spoke in Spanish to the woman who seems to both wait tables and cook.  I’m here to tell you that places like this (and I know there’s a few in your town) deserve a far more robust (and diverse) clientele.

Perhaps its fear keeping you away.  A few good friends of mine are unadventurous eaters, and while I cannot understand it, there is no shame in that.  Sensory integration issues make it so some people I know will actually just regurgitate some foods involuntarily; I do not encourage them to try and “muscle through.”  However, a restaurant’s authenticity does not preclude their lack of familiar menu items.  I know a couple unadventurous eaters that would’ve eaten the hell out of El Maguey’s nachos, pictured.  They’re a familiar sight: tortilla chips layered with cheese, beans, and a protein of your choice (I got ground beef) then topped with a healthy dollop of sour cream and guacamole.  If you want to “make it a fiesta,” they’ll add tomatoes, onions, black olives, and cilantro for a couple well-spent dollars.  I got them as an appetizer, and was surprised to find how much they packed onto the plate.  I had to stop short to save room for my actual meal, which was a shame, but I also get to tell you they’re still wonderful reheated. 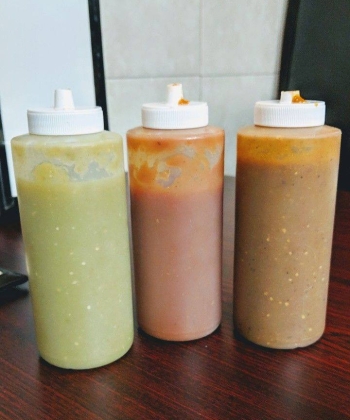 My actual meal was the green chile smothered burrito.  On the front door, it says “home of the pork green chile,” so I decided to order the house specialty.  It’s mostly a sauce made from green chiles, but then they seem to cook chunks of pork in it for quite a while.  The burrito was filled with the green stuff and smothered in it, with cheese melted on top and onions and cilantro upon that.  It’s a fork and knife affair, complete with sides of refried beans and rice, perfect vessels for the table sauces available in squeeze bottles.  Each is delicious, and in order from least to most spicy, they go red, green, brown.  The green sauce is different from the sauce on my burrito, though.  It’s spicier with hints of lime, and served cold.  My pork green chile was warm and rich, and extremely well complimented by the spicy brown sauce.

Little restaurants like El Maguey are everywhere. If you’re in the MidAtlantic like me, I must recommend giving it a try.  There are actually two restaurants in the area with this name; you want the one in Newark, with the worse online presence.  Google Maps has them both on record, but only one has a website.  I went to the other one.  I’m not just talking up this particular restaurant, either.  I’d bet five bucks you can come up with three strip malls within twenty minutes of your home that contain at least one restaurant each you haven’t tried.  Even if that’s a pizza place, it counts, and I’m encouraging you to try it. Now, if you’re reading from someplace like Northern Maine, you might win that bet, but next time you’re in town, try something new.  You just might like it.