There’s nothing like a good road trip, especially one through country I’ve never seen before.  I take similar joy in boat rides, and I did two of those on two different rivers (and two different boats) in the last two days.  Unfortunately, I owe you all an apology.  I was wrong in my last post; I was unable to make it to the bamboo forest.  The week flew by, and so some tough choices had to be made.  It was a choice between a hike through the bamboo forest, as discussed, or a boat ride up the Mae Kok river to an elephant camp, where tourists have the opportunity to ride atop one of the majestic beasts.

As I mentioned, I chose the latter.  The boat ride on its own would have seemed more

interesting than a simple hike (albeit one through a new sort of forest), but a boat ride with elephants at the end was simply too good to pass up.  I’d seen elephants before, in Africa, but you can’t ride African elephants.  Asian elephants are smaller and seem to be more willing to work with humans, provided the humans acknowledge their needs and wants.

The ride up the river was fantastic.  Despite the fact that much of my blog writing has been in warm places (tropical Africa, the Bahamas, and now Thailand), I’m not fond of the heat.  It takes a drop below freezing to start to make me shiver, but climb much higher than 75°F and I start to sweat far more than is comfortable.  Therefore, I relished the opportunity to sit back in a canopied river boat and enjoy the  bends of the river and the mountains beyond.  It was about an hour upstream from Chiang Rai that we disembarked and climbed the bank to the elephant camp. 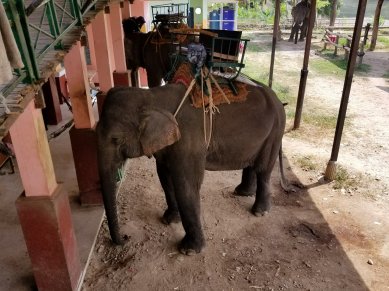 I’m not overly fond of horses.  They’re smarter than is comfortable for me, and they’re so big.  It’s worse with elephants, at least when I’m on the ground.  There are stalls around selling sugarcane and bananas for visitors to feed to the elephants, but I wanted nothing to do with that.  The seats atop the animals are so far from the ground that in order to get on and off, you must climb a flight of stairs and step from a dock onto the back of the animal and into the seat.  A bar sits in front of the tourist riders: something to hold onto as you sway back and forth.  The driver sits straddling the elephant’s neck, nudging the space behind its ears to direct it.

I wasn’t overjoyed with the elephants on the ground, but once I was up there, I loved it.

You can see how much you’re going to sway when you watch others atop their elephants.  It’s more than a little.  If you move with it, it’s not oppressive.  In fact, I felt positively regal sitting in my cushioned seat atop an animal that is not cheap to maintain.  I had a beautiful image in my head of riding into a town under my control astride my elephant, with my royal guard riding horses around me.  A man sitting atop a horse likely would not have been able to see over the back of my elephant, which had a chair on it where I sat.  The view from atop the small mountain our driver took us up was even more spectacular with the added height.  Down the other side we went, all the way back down into the river, where our mount delighted in the cool water, spraying us in the process.  The circuit ended with a trip through the nearby village, where we got a splendid look at the tops of many roofs.  The ride back down the river took half the time; there are many benefits to going with the flow.

The next day, it was time for a more proper road trip.  Chiang Rai is the northernmost province in Thailand, and at its northernmost point, two rivers forming international borders meet.  Thailand, Myanmar, and Laos all meet at this particular point on the Mekong River.  Naturally, a tourist trap full of shops and cheap boat rides across the water has sprung up, but there’s a dark history here as well.  Anywhere a line gets drawn that people aren’t just allowed to cross, they find reasons to break the rules.  The area has a history of illegal border crossings and drug smuggling, particularly heroin.

European trading companies trapped China and several other Asian nations into buying opium from them in bulk as a way to ensure their profits, with no concern for what it

would do to the populations.  In fact, they capitalized on the highly addictive properties of the drug and forced several nations into signing unfair contracts.  Thailand (then called Siam) made every effort to maintain a semblance of control over their population’s access to the stuff, but there was only so much they could do, as poor hilltribe farmers in the country’s far north began growing the poppies themselves.  Ultimately, the kingdom would overcome this, and a museum has been established to its memory.

It’s still very easy to get across the border, provided you don’t want to leave the special economic zone Laos has set up to bring a little of the tourist money across the Mekong.  It seems to work, too.  A whole cadre of shops and stalls selling knockoff merchandise and souvenir trinkets awaits those who charter boats.  I didn’t buy any of the whiskey with a cobra in it, but there’s no way it doesn’t sell well.  A couple shot glasses with Laotian national symbols on them were good enough for me.

I’m sad to be leaving Chiang Rai.  I feel as though I’ve only just settled in here, and now it’s time to go to an entirely different setting: Phuket (again, pronounced “poo-KET”).  If Chiang Rai is Thailand’s Vermont, Phuket is Las Vegas, but if it were in Florida.  I’d be lying if I said I wasn’t excited, but I cannot wait to see those mountains again.