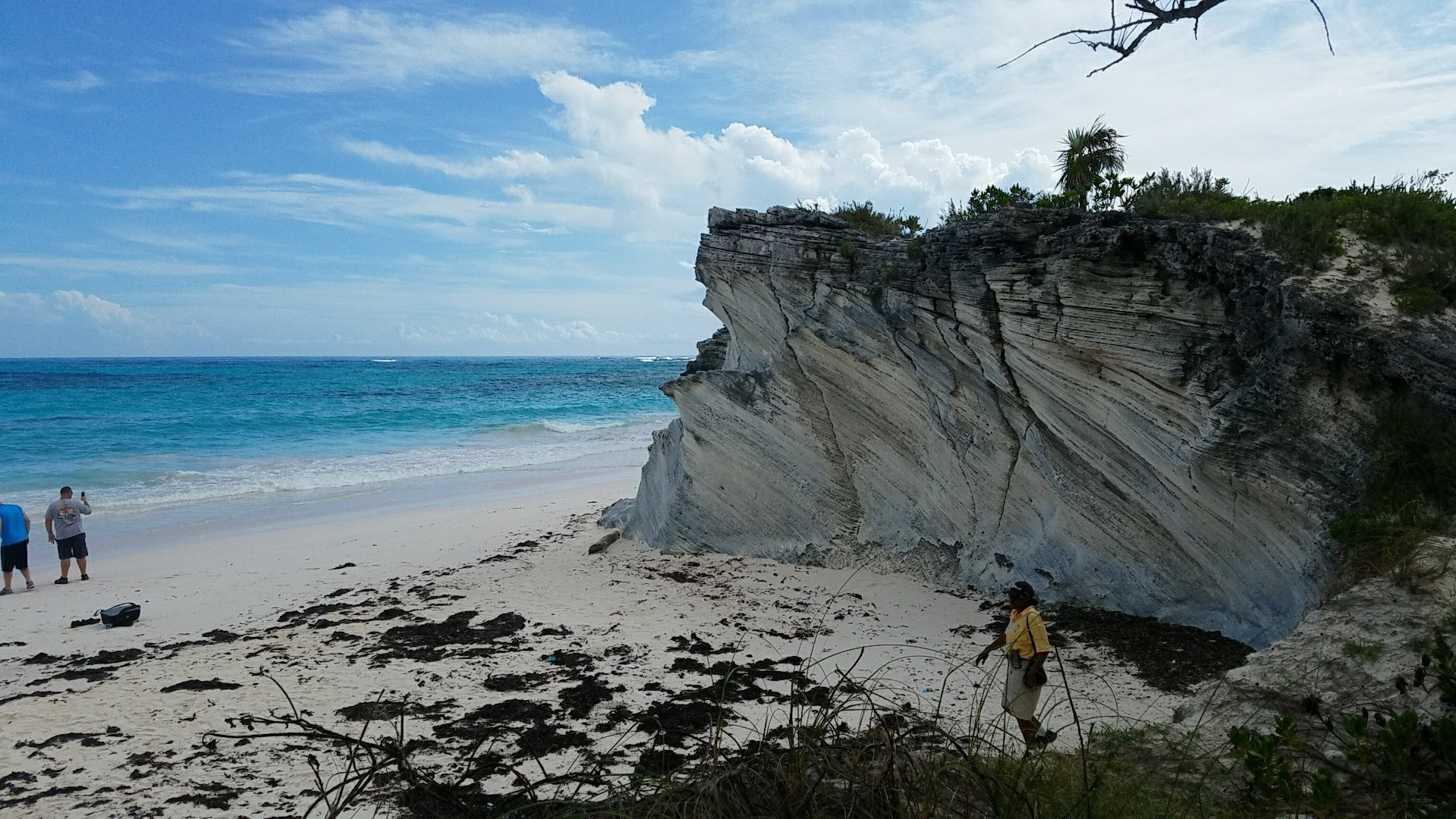 Boy are excursions exhausting.  It doesn’t help that I seem to be totally incapable of going to bed before one thirty AM at a minimum and had to report at ten thirty AM to catch a boat from my boat to the shore (and I wanted to eat before I left Carnival Pride).  Despite sleeping two hours later than them, I managed to catch the same tender (boat to shore) as the rest of my family, provided I shoveled my huevos rancheros (fromthe Lido Deck burrito joint) down in a serious hurry.  I rarely enjoy breakfast, and I was disappointed I didn’t get to savor them.  I keep waiting for a meal to not be fantastic, and it keeps not happening.

Princess Cay was our port of call: a beautiful private resort on the Bahamian Island of

Eleuthera, a long, thin island fifty miles east of Nassau, whose southern tip is considered to be the point where the Atlantic Ocean meets the Caribbean Sea.  Even cooler is the fact that the island is bisected by a stretch of land thirty feet wide called the Glass Window Bridge, so named for the stark contrast between the two bodies of water it separates, as though there were nothing but a pane of glass between them.

Though I didn’t get to see the Glass Window Bridge, I did get to drive a battered dune buggy to the southern tip of the island.  My good fortune being eternal, it rained before I even got to sit in the blasted thing, which had no doors, an open floor, and no wipers.

Better still were the freshly wet roads we took to the funner, bumpy trails.  I couldn’t get my buggy to travel in an actual straight line, which caused me to take it easy when I hit the actual trails.  To complicate matters further, my pedals were rather janky.  My brake pedal had almost no action to it, and my gas pedal was sticky, refusing to budge unless I stepped like I meant it.  Unfortunately, I was in a convoy in wet conditions, so I didn’t want to go too fast in the first place, let alone when I don’t trust my brakes.  I was able to solve this issue, however, by getting to know my vehicle.  Testing my brakes proved they’d stop me even if the pedal didn’t move, and when we stopped to see some sights, I let o

ne of the guides know about my gas pedal’s refusal to cooperate.

We hiked a short way from the parking area to see the ruins of the original lighthouse on the southern tip of Eleuthera, which were neat, but the real attraction was the spot where the Atlantic meets the Caribbean.  Eleuthera comes to a point, literally and geographically; beyond that is a narrow waterway with a small unnamed island on the far side.  In this waterway, waves coming in from both seas collide against the rocks and each other, creating magnificent splashes and roars that have shaped the surrounding cliffsides in striking undulating patterns—hurricane after hurricane over the years have also done their part to form beautiful rounded alcoves in the sparkling white limestone.  Looking out at the horizon, it’s actually quite easy to tell the cold, dark Atlantic from the placid, aquamarine waters of the Caribbean.  I wish I could have sat on that hilltop for another four hours, with the sun (it had decided to show its face) and the ocean wind and the waves crashing against the cliffs, but alas, I was with a hoard of impatient tourists and led by tour guides with a job to do, so on we ventured, to spend a little time on the empty, white sand beach just down the hill.

Ultimately, we made our way back to the buggies, which had been turned around for us, and I returned to my little black monster to find them jumping the engine with the truck they’d brought and taking a screwdriver to my gas pedal. A good sign. The engine puttered to life, so I mounted up and off we went.  Not ten minutes later, my little black buggy’s puttering petered out on a particularly narrow stretch of trail.  I managed to get the vehicle halfway into the brush before losing all motor skills (ha), but it wasn’t enough.  Luckily, the guy behind me was able to push me out of his way and the rest of the convoy could continue on.  It was quiet once the buggies’ engines faded into the distance, and a pleasant breeze floated through the trees.  The sun had gone back behind

the clouds, but the air was still nice and warm, so I sat and waited for the tour guides anchoring the convoy to catch up.  They jumped it; it sputtered to life, and then died again.  After jumping it a third time, counting earlier, the guide yelled “Go, go, go!”  There was nobody in front of me, so I went.  Trusting my brakes a little more—and remembering I was wearing a harness and had a roll cage—I pushed myself and my black monster, and had an absolute blast.  The thing held together and didn’t flip, despite me driving fast enough to catch up to the convoy before our next stop.  At one point, I sneaked my front wheels onto a rather large rock, but both my back wheels hit it at the same time.  The impact popped them into the air without taking all my speed, and enough of my momentum was going forward that it fit smoothly into my route through the bumps.  I hit the ground in stride and flew on.  On the next wide, flat stretch, the dune buggy caravan anchor pulled up next to me and shouted “Nice driving!” over the din of the engines.  I’ve never received such high praise.  The next stop was the ruins of the first church built on the island, but partway through the presentation, it started to pour, so we all bolted to our buggies and took off as quickly as possible.

It didn’t turn out to be very quickly.  Someone’s buggy midway through the line didn’t start, so those of us in the back could do nothing but sit and get soaked through. They did get it going again, though, and soon enough, we were off.  Naturally, we’d waited to get back on the asphalt until it was properly soaked again, but this time I had almost no fear.   While it didn’t stop, the rain did let up a little, so it wasn’t difficult to see as we made our way back.  The way back is always shorter, especially when you drive twice as fast, so there’s nothing more to tell.

At least, not about dune buggies.  All the rain caused my sister and aunt’s snorkeling excursion to be cancelled.  My aunt was fine with it; my sister was not.  When I went with her to the information booth to figure out what was to be done, my grandparents and aunt headed back for the tenders and the comfort of Carnival Pride, done as they were with the rain.  It turned out there was another snorkeling excursion about to start, and we would be able to get a refund for the cancelled one, so off we went.  The sun had come out, and the water was clear and calm.  I prepped for this cruise by binging a fair amount of the BBC’s Blue Planet, and I can now say with absolute certainty that if you enjoy that program at all, you’ll love snorkeling.  They give you a life vest so you can just float facedown on the water and never run out of air, and the reef we dove (and most like it, I’m sure) was not deep at all.  I’m not a very tall person, and I could’ve stood on the coral’s structures with my head above water in many places.  For the record, I didn’t.  It’s strange, I had to manually activate the difference between seeing schools of brightly colored fish and fan corals waving in the current on my television screen and through the snorkel mask.  Once I did, though, I became very glad that I got the opportunity to tag along on my sister’s excursion.

It was time to return home after snorkeling, for another exceptional meal at the Normandie and more fun on the Lido Deck, including a screening of Wonder Woman: Dawn of Justice by the pool.  From there, it was to bed early in preparation to explore Nassau, the capital of the Bahamas, in the morning.